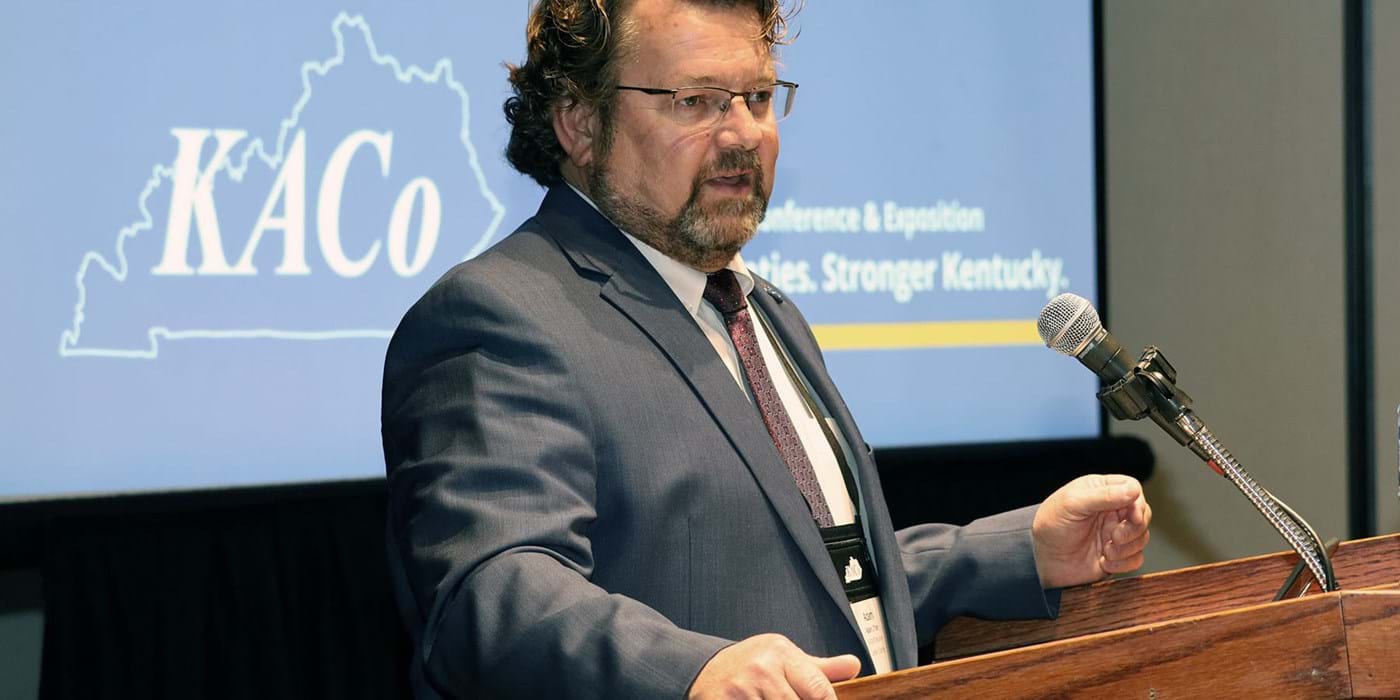 By Susan Riddell, Editor
Judge O'Nan has served on KACo's All Lines Fund Board since 2019.

Adam O’Nan was first appointed as Union County judge/executive in early 2018, and he said it wasn’t long before he started receiving support from KACo.

“KACo was the first group that reached out to me after my appointment, and I quickly became aware of the large influence our organization has on our counties and our state,” O’Nan said.

Judge O’Nan is going to extend his influence across the state similarly following his election as KACo second vice president at the 48th Annual KACo Conference.

“I ran for second vice president for the same reason I ran for judge/executive, and that is to serve others in a manner that will create real and lasting improvements,” O’Nan said.

Following his judge/executive appointment, O’Nan went on to win the general election in late 2018. He recently ran unopposed heading into his second full term.

O'Nan grew up on a farm in Sturgis, Kentucky, where he was taught firsthand the meaning of hard work and service to others. His family raised corn, soybeans, hay crops, hogs and cattle.

O'Nan has been married to Kristi Henshaw O’Nan for 33 years, and they have four daughters: Audrey, Sarah, Hannah and Emily. He also has two sons-in-law with one more joining the family in May 2023.

Perhaps his favorite role is that of “Pop” to two granddaughters, one grandson, and another granddaughter due in January 2023. When not in his official judge/executive position, he can almost always be found on his farm with his family.

Prior to becoming judge/executive, O'Nan joined his father as a partner in Land O’Nan Farms, and for 30 years, he continued the farm operations while expanding both the land base and cattle numbers. During those years, he held various leadership positions in both civic organizations and his church where he has been a deacon, elder and Sunday school teacher.

O'Nan worked briefly for the Internal Revenue Service as a revenue agent following graduation from college.

He graduated from the University of Southern Indiana with a degree in accounting.

O'Nan was sworn in as second vice president and with the full board of directors on the final night of the annual conference.

“KACo has been blessed with extraordinary leadership,” he said. “I certainly plan to continue the path they have laid out while hoping to expand on building relationships with our state legislators to communicate with them on behalf of county officials.

“I also plan to continue supporting our KACo staff members,” O’Nan added. “They are where the rubber meets the road, and their impact is invaluable.”